A week ago, MLB invited to 120 teams to join its new minor league system. Pointedly, it’s just an invite. To proceed, teams will have to sign non-disclosure agreements and waive the right to sue. Then, and only then, will teams get to review the new licensing agreements for which many critical aspects are still being negotiated.

Agreements will expand to ten years instead of the old two or four, but teams can’t feel any more secure because of the possibility of additional downsizing and more radical changes after 2030. Marketing and territorial rights are in disarray. MLB would own the customer data of minor league teams and license it back to them. Propriety prevents me from sharing my reaction to that.

Nevertheless, I expect nearly all teams to sign. Despite the one-sidedness of the process, the alternative is… what? Going it alone as an independent in a structure where even the “independents” are increasingly aligned with MLB? Best of luck. Still, there may be smaller, low-level clubs that decide the stadium, travel and other requirements are too onerous.

As for the new system, AAA and AA didn’t change much. (For purposes of discussion let’s assume every invited team ends up signing on.) Ten clubs have new affiliations, and the Marlins’ AA team in Jacksonville is jumping to AAA. In the two A levels, all but three out of 60 have changed: 13 have a different parent club and another 44 have switched from low to high-A or vice versa. Like Texas, 12 other clubs kept their two A-level affiliates but swapped the order.

Nine of the 40 short-season teams remained in affiliated ball. Six, as expected, are from the former eight-team Northwest League. The others are Aberdeen, Brooklyn and Hudson Valley.

Most affected are the Yankees, with two lost short-season teams, two new affiliates, and an existing affiliate with a change in level. Close behind them are Arizona, Colorado and Kansas City. The White Sox, long protective of their compact footprint in the southeast, are the only club with no changes outside the loss of their short-season team.

The Rangers are in the middle in terms of affiliation changes. Here’s a look at how its minor league clubs could be arranged (division placements are pure guesses on my part except for high-A):

Ideally, the eight western MLB clubs would have their own western-oriented eight-team AAA league, but the demotion of Fresno and the Dodgers’ ownership of Oklahoma City won’t allow it.

The old PCL essentially consisted of two separate eight-team leagues with limited “interleague” play. The western side is where the PCL earned its reputation as a hitter’s paradise, while the eastern side (where Texas played) was neutral. Whether in Round Rock or Nashville, Texas’s AAA squad rarely played in a Mountain or Pacific time zone, usually 16-24 games a season. Now, with only ten teams and two odd-numbered divisions requiring daily interdivision play, plus the likelihood of division rivals in El Paso and Albuquerque, I’d guess the Express will play no fewer than 40 games in a more hostile environment for pitchers. If the league continues to use the livelier MLB ball as it did beginning in 2019, some 14-10 scores are in Round Rock’s future. 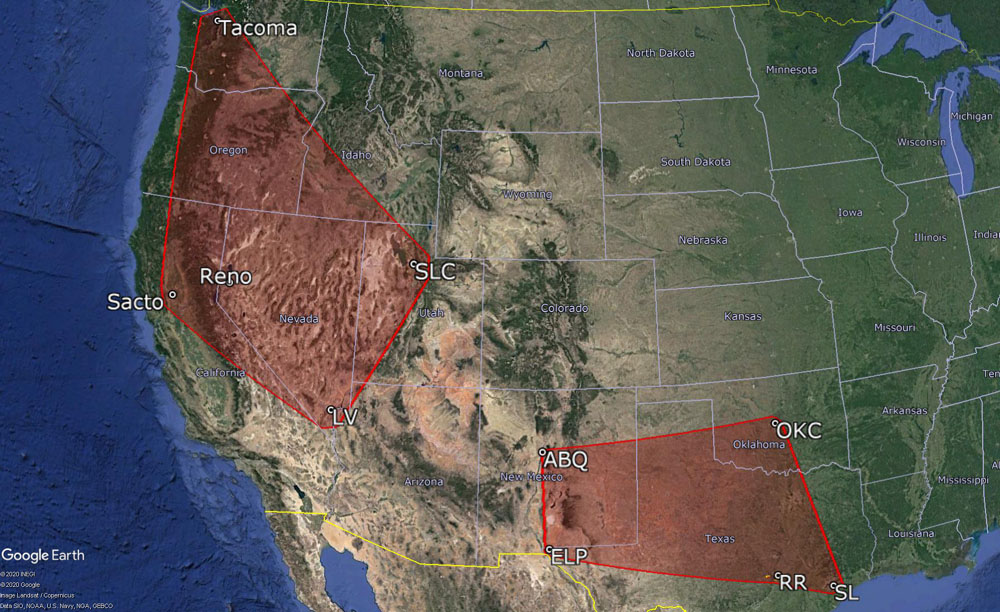 The Texas League expands to ten teams for the first time in its lengthy history but otherwise maintains a similar footprint and balance. San Antonio is back after a two-year absence. The Missions will slightly ease the travel burden on Corpus Christi, which is at least 430 miles from every other team. Also rejoining after 12 years, unwillingly, is Wichita. The Wind Surge aren’t any farther from Frisco than Midland or Amarillo and are closer than Corpus. 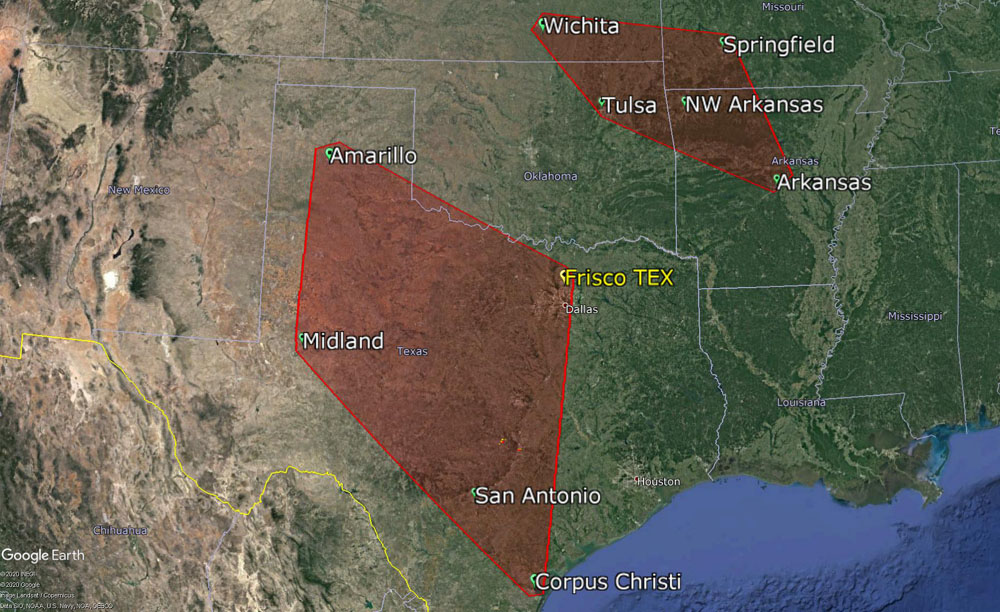 For years, Hickory played in a league sprawling from southeast South Carolina to northwest Georgia to northern Kentucky to within sixty miles of New York City. Now, after the “improvements” to league footprints, Hickory’s league picked up a team farther away in Kentucky (Bowling Green) than the one it replaced (Lexington), a team actually in New York City (Brooklyn), and another team 70 miles north of NYC (Hudson Valley). And with a seven-team south and five-team north, far-flung interdivision play will be a constant. Just look at this: 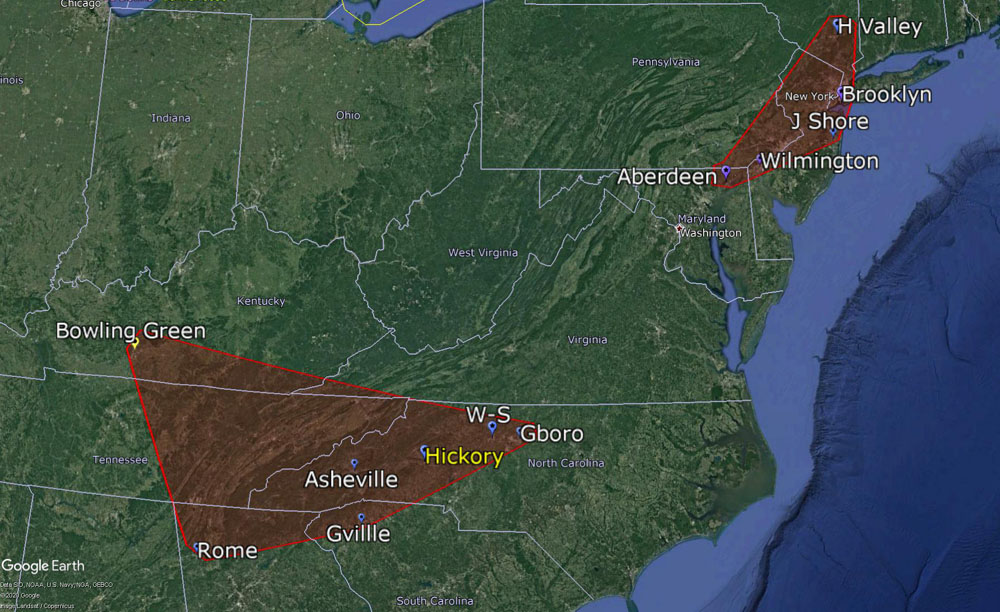 The dilemma is Bowling Green, which doesn’t fit anywhere geographically, but the Hot Rods had the backing of their parent Rays and play in a relatively new facility. Hickory’s travel situation might be worse than before, especially with proposed rules demanding flights or layovers for long trips.

I don’t have a solution. Keeping Bowling Green in the Midwest League and pushing Lake County (NE Ohio) into the Mid-Atlantic helps a little, but not much. Honestly, the solution might be to adopt MLB’s cold-bloodedness and tell Bowling Green to join the Appy League’s forthcoming college circuit.

The overhauled Sally League (assuming it retains the name) has worked out very well. I have no idea if the league will divide into three divisions but it seems crazy not to. Observe: 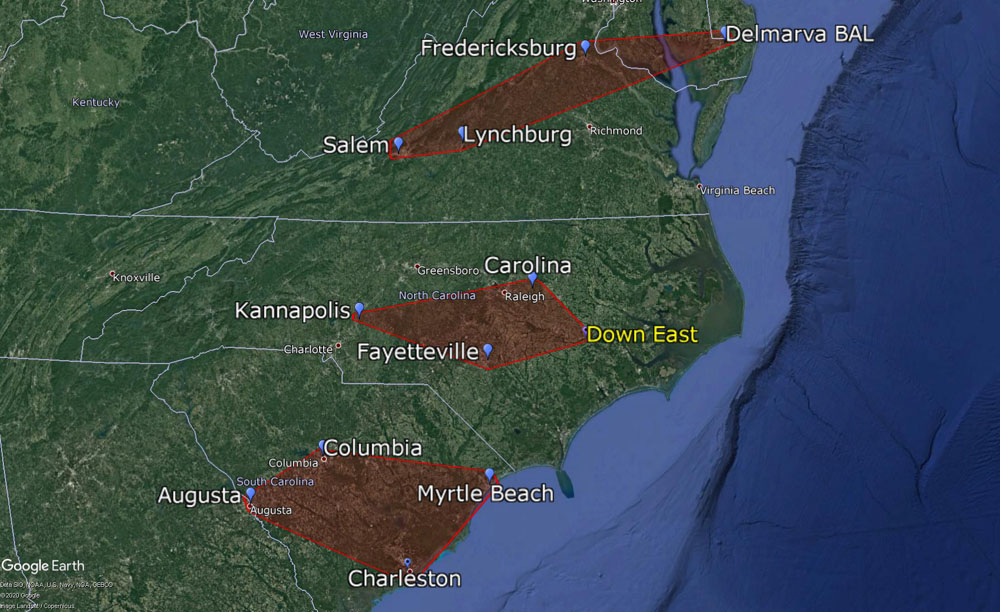 Isn’t that pretty? Even better, no longer does Texas’s low-A squad have to venture above the 40th parallel or west of the Appalachians.

Some Of The Outsiders

Frederick – This team led all of high-A in attendance in 2019 and outdrew 13 AA teams. Its reward is relegation to the MLB Draft League. The stadium was constructed in 1990 and renovated sporadically during the previous decade.

Lancaster – The Jethawks were High Desert’s twin sister in terms of boosting offense to an absurd level. Lancaster drew better and had a better park than High Desert, but the addition of Fresno to the  California League forced another out.

Lexington – The last game played by Texas’s minor league system in 2019 took place in Lexington, Kentucky, where the KC-affiliated Legends defeated Hickory in the Sally League championship. The Rangers will never visit again. Or at least not for a long while. Lexington consistently ranked in the top half of the league in attendance and played in a 19-year-old park.

Clinton – Texas’s low-A affiliate from 2003 through 2008 is a city-owned team in a small town. It never had a chance.

Trenton – The Thunder and Jackson (TN) were the only AA teams to fall out of the affiliated system.

Boise – The short-season Hawks consistently drew better than Tri-City but are geographically isolated. Two ownership groups had angled for a new stadium to no avail. That probably would have saved the affiliation.

Texas traded RHP Rafael Montero for RHP Jose Corniell and a player to be named.

Corniell signed on July 2, 2019, so he hasn’t pitched in a real game yet. He ranked 22nd in the Seattle system per Baseball America and 24th per MLB.com.

Montero is arbitration-eligible and can walk after 2022, and the Rangers have somewhere between 10 and 14 other relief options on the 40 depending on how wide you cast your net. He was a post-TJ minor league free agent who posted a couple of pretty good seasons and brought back a decent prospect. That works.

Texas traded OF Scott Heineman to Cincinnati for IF Jose Acosta.

Perhaps Heineman finally has a place to lay his head. Designated for assignment last month and re-signed to a deal presumably more favorable to the club, Heineman was DFA’ed again to make room for reliever Jimmy Herget. He remains on the 40 for Cincy. Heineman’s a better hitter than his career .189/.259/.331 line would suggest, but maybe not that much better, and players of his ilk usually don’t get extended looks. The Rangers already have seven other outfielders with MLB experience on the 40.

The 20-year-old Acosta has split time between second and third. Despite scant stateside experience, he’ll be Rule 5-eligible next December, having signed in July 2017. He batted .395/.481/.579 between the Dominican and US rookie leagues in 2019. Stats at this level aren’t anything to hang your hopes on, but his 25 extra-base hits in 53 games are notable. He’s not on anybody’s top-30 prospect list but received a favorable mention by Eric Longenhagen of FanGraphs.com.

Ryan was Cleveland’s 30-th-round pick in 2016, then traded for OF Jay Bruce. FanGraphs.com rated him New York’s #24 prospect entering 2020. He doesn’t appear anywhere else but has received favorable mention in Baseball America for his mid-90s fastball and quality breaker. He wasn’t part of the Mets’ pool last summer and slid through the Rule 5 draft, but he appears to be a legitimate relief prospect.

The combination of a lost minor league season and typical upper-level churn has left the Rangers shorter on viable AA/AAA players than I can ever recall. (To be clear, they’re not alone.) I count 12 players with AA/AAA experience who have yet to reach the Majors. Add another dozen or so who’ll be optioned next March. That leaves another two dozen openings, more or less. A fair number will come from within the organization, but many will be free agents like those above.

Ortiz is back. Texas’s top pick in 2014 was traded with Lewis Brinson and Ryan Cordell for Jonathan Lucroy and Jeremy Jeffress at the 2016 deadline. The Brewers then dealt Ortiz to the Orioles at the 2018 deadline. He made three appearances during 2018-2019 but didn’t miss many bats and allowed 19 of 36 opponents to reach safely. After being outrighted at the end of 2019, he didn’t spend any time in Baltimore’s pool. I assume he’s AAA depth, although one possibility could be to let him air it out in short stints in the hope that he might provide bullpen help. He’s still just 25.

In 2016, I saw Cotton come within an out of a perfect game. A month later he’d make his MLB debut, and he held the 92-63 Rangers to a run in seven innings in his fourth start. 2017 was messy, full of blisters, homers and the worst control of his career. He then missed all of 2018 and much of 2019 because of surgery on his elbow and hamstring. Cotton was originally in the Cubs’ player pool but later designated for assignment.

Edubray Ramos had three mostly effective years with the Phillies, but in 2019 his slider backed up hard and his fastball dropped two ticks. If he can regain form he’ll almost certainly pitch in Arlington.

Jason Martin was part of the package Houston sent Pittsburgh for Gerrit Cole. The 25-year-old can play center but hasn’t hit much above AA.

Texas is losing an institution. TR Sullivan of MLB.com is retiring at the end of the year. Sullivan has covered the Rangers for over 30 years, the last 15 for MLB.com. I had many (but not enough) opportunities to chat with him over the years and will miss his writing and presence.
--

Dallas attorney Jamey Newberg has been commenting on Rangers from the big club down through the entire farm system since 1998.

Scott Lucas was born in Arlington, Texas, to Richard and Becky Lucas. He lived mostly in Arlington before moving to Austin, where he graduated from The University of Texas. Scott works for Austin Valuation Consultants, Ltd., and has published several boring articles about real estate appraisal and environmental contamination. He makes a swell margarita and refuses to run longer than ten kilometres.

Eleanor grew up watching the AAA Mudhens in Toledo, Ohio. A loyal Ranger fan since 1979, she works "behind the scenes" at the Newberg Report.