The Rangers needed to clear their COF/DH logjam and create room on the 40-man roster. They've done so by trading OF Nomar Mazara to the White Sox for minor league OF Steele Walker.

In March 2016, I described Nomar Mazara as "the type who'll bat fifth or sixth without drawing much attention. That's a good thing." He would in fact spend most of his days in Texas hitting higher in the lineup, but without the hoped-for payoff. An average Major Leaguer tallies about two wins above replacement level per year. Mazara's career WAR in four years is under two wins. He's been remarkably, aggravatingly consistent: slightly below average at the plate, definitely below average in other respects. He's still just 24, and the change of scenery might reveal his hidden upside, but the consistency is telling. In 24 months (4 years, 6 months per season), Mazara has an .800 OPS in only five of them, and two of those came at the very start of his career. He hit poorly on the road (.245/.297/.408) and against lefties (.231/.272/.361).

As far as expectations for Mazara in Chicago, the good news for him is that even another bland season would be worth at least two wins to the Sox. In 2018, their right fielders batted an unfathomable .220/.277/.288 and were a collective 1.8 wins below replacement level, easily the worst in baseball. Against that benchmark, Mazara's modest but relatively assured performance might just warrant his anticipated arbitration-goosed salary of $5.5 million. (Incidentally, Chicago's RF "production" included 307 plate appearances from former Rangers Leury Garcia (.261/.284/.324) and Ryan Cordell (.206/.271/.291).

Steele Walker. Yes, that's his name. The Prosper native attended the University of Oklahoma and was selected in the 2nd round, 46th overall, in the 2018 draft. As such, he's only 14 months younger than Mazara. Walker fit somewhere in the lower half of Chicago's top ten prospects. He lacks a standout tool but does everything reasonably well. At absolute best, he'll become a starting center fielder with a decent bat. At worst, an up-and-down corner guy. Realistically, I think we're looking at a 4th outfielder with some upside. He spent most of 2019 at high-A Winston-Salem, batting .269/.346/.426 (a 118 OPS+ by my calculation) with ten homers and nine steals in 100 games. Walker was assigned to Frisco and will probably start there next April.

If you're disappointed in the return for this trade, I feel you. A second-rounder for a record-breaking international signing with 79 MLB homers? But let's turn this around. What would you give from the Rangers to acquire someone of Mazara's salary and caliber? Would you relinquish a starting pitcher or position player? A solid reliever? A top-five prospect? Would you even part with 22-year-old Davis Wendzel, last year's #41 pick? Most of what Texas received in this deal is salary relief. Getting a top-tier prospect on top of that is a lot to ask. Given our hopes for Mazara's career versus the reality, I think any trade was destined to be disappointing.

As for alternative scenarios, Mazara could have moved to first base, perhaps, but at that position he's literally replacement level unless the bat improves. Texas also could have parked him in AAA Nashville, salary and all, while Shin-Soo Choo played out the final year of his contract. Neither option is appetizing, although one of those might have more appeal to you than what the Rangers actually did. 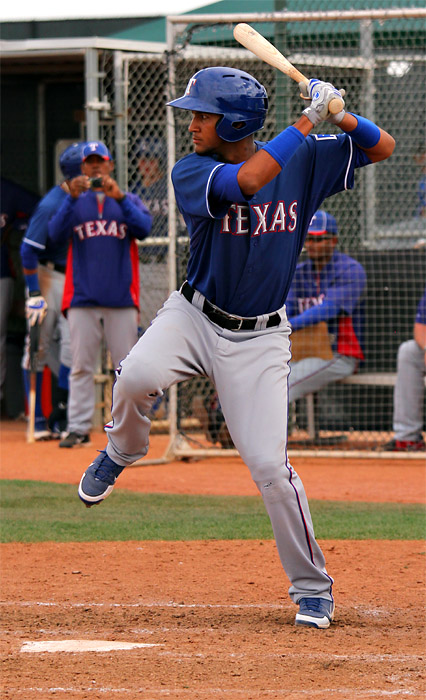 Mazara in late 2015, in one of his last minor league games: 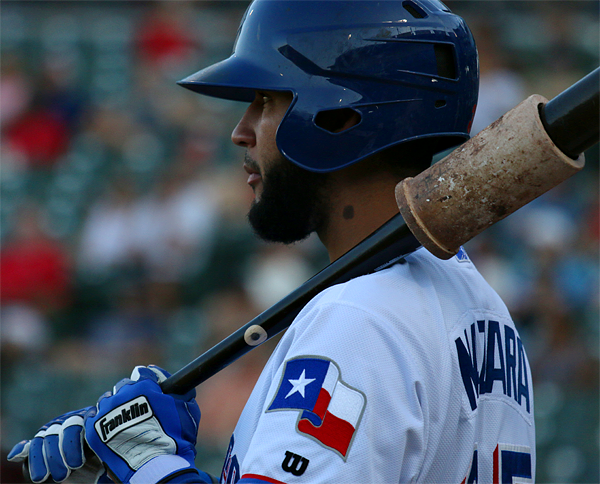 Dallas attorney Jamey Newberg has been commenting on Rangers from the big club down through the entire farm system since 1998.

Scott Lucas was born in Arlington, Texas, to Richard and Becky Lucas. He lived mostly in Arlington before moving to Austin, where he graduated from The University of Texas. Scott works for Austin Valuation Consultants, Ltd., and has published several boring articles about real estate appraisal and environmental contamination. He makes a swell margarita and refuses to run longer than ten kilometres.

Eleanor grew up watching the AAA Mudhens in Toledo, Ohio. A loyal Ranger fan since 1979, she works "behind the scenes" at the Newberg Report.